With all the attention and publicity surrounding the Longbridge factory in recent years, it’s easily forgotten that another former Rover Group plant was once a very significant player in the European car manufacturing industry. Perhaps leafy Oxford and its dreaming spires never appealed to the media in the same way as a factory in the heart of the industrial Midlands, but it’s here that the story of the Maestro came together. Quite literally, in fact.

Car making at Cowley goes back to 1913 when William Morris converted a derelict military college into an assembly hall for motor vehicles. Any association with Austin did not begin until the formation of BMC, the famous merger between the two great rivals Morris and The Austin Motor Company (of Longbridge) in 1952.

Over the road from Morris Motors was The Pressed Steel Company of 1926 which initially supplied bodies to Morris, but quickly gained other UK customers. By the 1950s Pressed Steel at Cowley (still an independent entity) were making bodyshells for most UK car companies and some overseas. A takeover by BMC in 1965 finally enabled the complete integration of manufacturing facilities on one site, even if it did have a dual carriageway running straight through the middle of it. 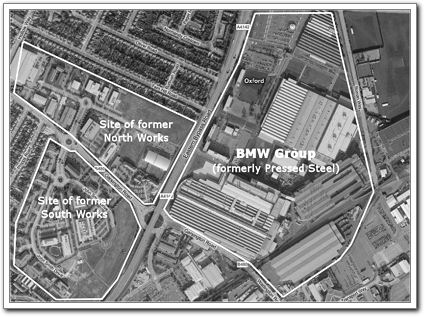 By the end of the ’70s and a long period of stagnation in British Leyland’s product range, three new cars heralded much change at both Longbridge and Cowley as both were upgraded with the robotic technology used in their manufacture. Longbridge got the Metro, but the two larger cars (Maestro and Montego) were to be assembled at Cowley, although assembly of certain major components was undertaken separately at other Austin Rover plants.

The Maestro was the first new British designed vehicle for eight years to come out of Cowley, creating 1100 new jobs at the factory. An enormous investment was made into Austin Rover plants for the Maestro & forthcoming Montego, then known only as LM11, including £13 million at Longbridge where the new R Series engine would be assembled, £10 million at the Drews Lane components plant, £1 million at the foundry in Tipton where engine blocks were cast, and £21 million at Austin Rover’s Swindon plant which supplied most of the body pressings.

Of the £147 million investment at Cowley itself, £32 million was spent on robotics and automation in the key body-in-white and paint facilities. In the body plants ‘A’ building an area of 390,000 square feet was completely re-equipped with robots and large, automated multi-weld units. By the second week of December 1982 the first production Maestro had left the line, with an output of over 2000 a week by the time of its launch the following March.

Of the thousands of components that made up an early Maestro just five were foreign. Apart from VW gearboxes and a German clutch the list consisted of one lamp, one synthetic rubber part and an electronic module. Of the Maestro’s yearly £150 million component spend, 90% would go to the British component industry. Components had traditionally been sourced from a number of different suppliers either because the volumes required needed more than one set of tools or simply to minimise the risk of a disruption at any one individual supplier stopping the whole assembly line. Austin Rover’s policy in the ’80s moved towards sourcing from single suppliers to achieve savings by enabling individual suppliers to make huge increases in volume. In 1983 just five companies, each specialising in one product, supplied AR with up to three million engine valves, wheels, sets of carpets, brake pipes and batteries. 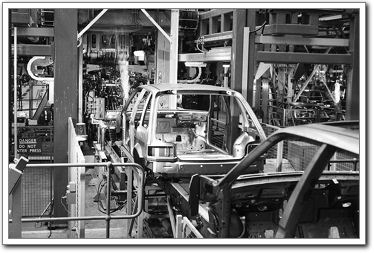 Unlike the Metro at Longbridge, it had always been intended that the same lines at Cowley would have to cope with a family of at least four different models, encompassing not only the Maestro hatchback but also the forthcoming van derivative and the LM11 saloon and estate. A planned output of 4000 cars a week was not enough to justify splitting up production, and Maestro volumes alone would not have justified the substantial investment that was made.

This approach would require a certain amount of flexibility in terms of body panels to cope with the number of different models being produced. It’s well known that Maestro and Montego door panels were identical below the window frame, but the two shared other less obvious panelwork. When the Metro and Mk 3 Escort were launched one respect in which they were unique was their use of one pressing for a whole bodyside. The Maestro reverted to several side panel pressings to achieve commonality with other models in the family. Of the 360 panels that made up both cars, 136 were unique to the Montego and of the remaining 234, a considerable number of the original Maestro tools were later modified to the design of the Montego and the same design then used on the Maestro. 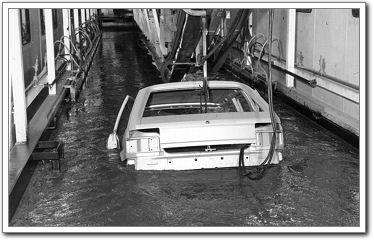 Construction of bodyshells began with the main floor on the press line initially installed at Cowley for the Triumph Acclaim, and assembly by one of the new multi-welders. This came together with the front and rear end at another multi-weld station to produce the underframe. The underframe, side and roof panels were fixed together with metal tags before moving on to the automatic body framing station where they were then welded together into a rigid bodyshell. Once in every shift a three axis measuring machine would be used to check accurately more than 120 key dimensions on a randomly chosen bodyshell so that any problems identified could be quickly corrected.

From here the completed bodies would take a trip to the paint shop in South Works ‘E’ block by means of a conveyor bridge that used to cross the Oxford eastern bypass, not unlike the setup at Longbridge over the A38. Before painting bodies were subjected to total immersion pre-treatment in a series of chemical and rinse baths, then after drying and cooling, immersion in an electrophoretic primer to give them added resistance to corrosion. Before passing to the underseal section, all seams on to body were sealed as a further anti-corrosion measure.

Rather than making do with a separate paint line and the associated colour matching problems, plastic bumpers were fitted to the cars before painting. These were delivered from the external supplier with primer already applied. Much had to be done initially to get the gaps between the bumpers and body right so that everything would be painted properly, and to overcome the problems caused by thermal expansion of the bumpers when subjected to temperatures of up to 135oC in the paint plant ovens. 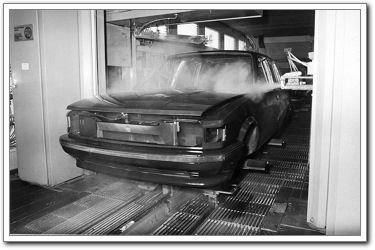 Painted bodies moved by automated conveyor to a 150 capacity painted body store, from where they were sequenced onto the 2600ft long trim and final assembly line in South Works. The first 600ft stage of the track was where door mechanisms, side glass, wiring and steering were fitted. At the end of the first stage bodies were lifted automatically and fed onto the second stage where headlining, wiring, facia and lighting were fitted and tested. The complex facia and instrumentation was assembled and tested on its own conveyor system which delivered completed facias to the fitment station on the trim track.

Once the various interior mouldings and front and rear screens had been fitted, each car was subjected to the dry leak test, that Austin Rover made much of in publicity material at the time, and as first used with the Triumph Acclaim. Instead of spraying cars with water to test for leaks, they were injected with a mixture of air and helium. Robot mounted sensors moved along precisely defined paths to detect any escape of gas through the doors, windows or seams.

Rather than expecting end of line inspectors to filter out ‘rejects’, extra quality control was increasingly built into the production process with the concept of ‘zones’ placing accountability for quality and output for a particular aspect of production upon its supervisor. This concept, originally introduced with the Metro at Longbridge, meant that quality could be traced right down to an individual operator on a particular shift. In addition, employees were responsible for making ‘overchecks’, or ensuring that previous jobs on certain critical features had been completed correctly. Whilst all of this might seem like mere common sense when judged under today’s exacting standards, it was seen as highly innovative at the time. 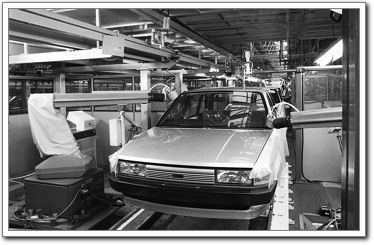 The final stages of fitting out involved the major mechanical sub-assemblies – engine, transmission, suspension and brakes – which were raised from beneath the car and bolted into position. Engines were hot tested and tuned as part of their assembly at Longbridge, and were mated with transmissions before being fed into the final assembly line at Cowley. With wheels fitted to the cars they were then lowered for seat fitting, brake bleed, coolant fill and other final touches.

Completed cars moved through the test suite under their own power where they’d go through a battery of checks to suspension, wheel alignment, electrical systems, and rolling road to check power output and braking performance. Within ‘S’ block every finished Maestro would be valeted and receive a further wax treatment for added protection before making its journey to the customer or showroom.

With the Montego going into production by early 1984 the basic process would continue largely unchanged for a further decade, but with sales never quite achieving the volumes that Austin Rover had originally intended. 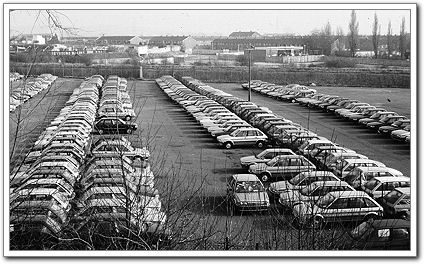 Hundreds of Maestros ready for customers. How many of these survive today?

By then, known as Rover Group’s Large Cars plant, Cowley was inevitably larger than it needed to be for the volume of cars it was producing by the early 1990s. Morris’s original North & South Works were becoming more difficult to upgrade with modern equipment and were demolished in 1993 to become a modern business park. The only remaining clue to the significance of this part of the site today is a solitary obelisk in the middle of a roundabout.

When North & South Works closed under BAe in December 1992, all Rover 600 and 800 manufacture was centralised in the former body plant that had grown out of the old Pressed Steel Company buildings across the road. Maestro & Montego production was already being run down, with the last cars virtually being hand built “in a corner” of the factory. Just 4043 Maestros were produced during 1994, compared with over 100,000 in 1983. Today the site is owned by BMW Group, and is used for building the highly successful Mini. 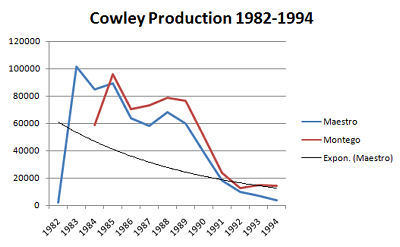